I have a frustration with the way that the Linq designer needs to be refreshed manually everytime a database field changes. It destroys any other manual work that's been put into the data structure such as setting the Auto Generated Value or changing the way that properties are get or set. Maybe the next version of VS will have some sort of 'refresh schema' button that will check back with the database and display the differences with your Linq schema and allow a merging of changes.
Posted by Greg at 4:05 PM No comments:

I just had the weirdest exception occur in my WPF app. I've got a listview with an embedded GridView with GridViewColumnHeaders. The headers have an event to sort them called GridViewHeaderClick. Now when I click the scrollbar buttons to scroll the grid vertically or horizontally it fires this event. No idea why. Crazy heh? I'm gonna put in a work around...
Posted by Greg at 6:04 PM No comments: 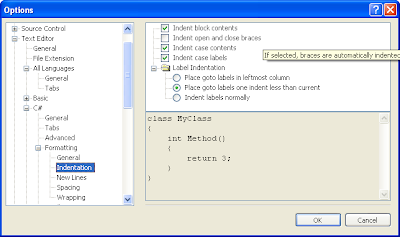 VS2008 Beta 2 changes the default curly braces indentation so that the braces line up with the next line not the previous one. I just can't handle this so here's the setting to change it back. (Uncheck Indent open and close braces)

XAML to XPS with pagination etc

Note to self: Spyware

Another note to myself in case I ever need to clean out spyware.
See http://www.codinghorror.com/blog/archives/000888.html
Posted by Greg at 12:02 AM No comments:

Scott Guthrie recently blogged about the multi-targeting support of VS2008 (Orcas' new name). There's some good stuff in there about some of the cool stuff coming out of VS2008 and .netfx3.5. I also noticed this:
We haven't announced any official RTM dates, but we are planning to have our final beta (Beta2) ship later this summer. Historically the final RTM date of a VS release is usually not too many months off from that.
Might be old news to some but to date I havn't heard of any more concrete release dates than this.
Posted by Greg at 10:13 PM No comments:

When moving a user control that referenced another assembly into a user control within that assembly, remove the assemblyname attribute from the clr-namespance declaration. It will spit the dummy and tell you that the tag does not exist in the namespace when you can clearly see that it does. Another idicator that this is happening is if you hover over the InitializeComponent() method in the constructor it will ask if you want to generate the method stub.
So if you've got :-
xmlns:poo="clr-namespace:CompanyName.Product.Client.Support.Controls.Reports;assemblyname=CompanyName.Product.Support">

and you're now using the poo reference from within itself it will not compile. You need to change it to :-
xmlns:poo="clr-namespace:CompanyName.Product.Client.Support.Controls.Reports">

While I'm on it, another issue that I came across yesterday was getting a dependency property to work from within a usercontrol. I had it all wired up correctly but it didn't seem to be working. Upon consultation with the guru it was due to the fact that I hadn't specified the DataContext of the usercontrol to itself.
Posted by Greg at 7:12 PM No comments:

Tools and tips I couldn't live without